Goalball, like others sports that have been created or adapted for individuals with disabilities, is a silent sport where participants attempt to roll a ball with bells into an opponent’s net for points. Opposing players must remain on their hands and knees and use ear-hand coordination to block shots thrown at their net.

At NWABA, we’ve had the pleasure of hosting several Goalball events, most recently at the Fort Boise Community Center in Boise, ID and the University of Oregon in Eugene, OR. As the premiere team game for blind athletes, let’s take a quick look at the history, rules, and court layout of goalball.

Created by specialists from Austria and Germany in 1946, Goalball began as an effort to relieve the rehabilitation process for veterans that were visually impaired during World War II, but it wasn’t until the 1972 games in Germany when goalball made it to the Paralympics as a demonstration sport. Four years later, goalball was officially added to the Paralympics at the 1976 games in Canada. Since 1976, Finland, Denmark, and the USA teams have been bigger names in competition. Women made their move into the Paralympics at the 1984 games in New York. At the summer Paralympic games in 2016, Turkey, China, and the USA teams won the gold, silver, and bronze medals respectively.

Goalball can be played at any age with an adaptation of the size of the ball. Within recent years, goalball has made its emergence in the collegiate scene where five national tournaments have been held across the country. The first and second national tournaments were hosted by Portland State University in Washington in 2015 and in Portland in 2016, respectively. In the following two years, the tournament was held on the east coast by Slippery Rock University of Pennsylvania in Pennsylvania (2017) and by Towson University in Maryland (2018). The fifth annual goalball tournament is projected to be held at Towson University again in 2019. Unlike playing at the elite level, goalball at the collegiate level allows athletes without visual impairments to participate in practices and tournaments to further promote and develop the sport at this level.

Every four years, the rules and regulations of goalball are adapted by the International Blind Sports Federation (IBSA). The rules are heavily influenced by players and coaches at the Paralympic level, where rule change requests are submitted to a subcommittee and reviewed at various tournaments. Although there are many rules and regulations, the following list includes a basic overview of gameplay, the rules for eyeshades, game protocol, and penalties. If you’d like to see a full list of rules for 2018 to 2021, you can visit the IBSA’s website here.

Goalball is played on a court by two teams of three players (six players total are allowed on each team). The objective is for each team to throw the ball, in some cases like rolling a bowling ball, toward the opponent with the hopes of getting the ball past the opponent to score. To stop the ball from going in the net, teams must block the ball with their body by diving from a crouched position. This exchange occurs over two 12-minute halves.

Eyeshades are worn by every player on the court and they must always be worn during game play without being intentionally touched. Players cannot wear eyeglasses or contact lenses under their eyeshades and (at the Paralympic level) they must have their eyes covered by gauze patches or a similar material approved by IBSA. Eyeshades are worn by every player, regardless of their level of vision, to create an even level of playing fairness among all athletes.

Every game begins with the referee asking the audience to silence their mobile devices and to remain quiet while the ball is in play. To start the game, the referee will call “quiet please” then “center” to let the center player know the ball is coming toward them. Once the referee calls “play,” the clock for the half and the 10-second clock begins. Within this timeframe, teams can score, throw or block the ball out of bounds, or receive a penalty. When a ball is thrown or blocked out of bounds, the referee or goal judge will drop the ball in front of the player the ball went out closest to. The referee will then call “quiet please” and “play” to signify the ball is back in play, the audience should be quiet, and the 10-second clock should be restarted.

There are two types of penalties that can occur during gameplay: personal and team penalties. There are eight personal penalties and five team penalties that can be called. Personal penalties include short ball, long ball, high ball, eyeshades, illegal defense, personal delay of game, personal unsportsmanlike conduct, and noise; Team penalties include ten seconds, team delay of game, team unsportsmanlike conduct, illegal coaching, and noise. It is important to note that these rules and regulations are utilized at most levels of gameplay or are adapted for younger players.

The goalball court is an 18.0 meter by 9.0-meter area, but it is broken up into six three-meter sections. An image of the court is displayed below. 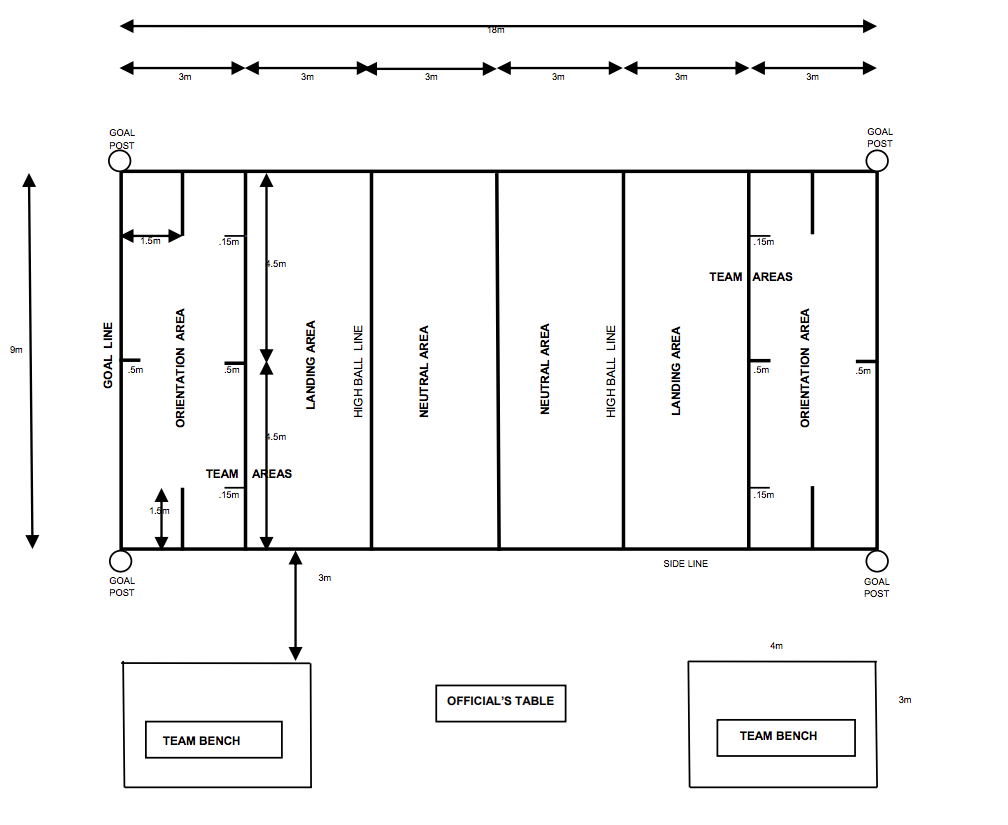 A goalball court is created with string or wire and tape. The tape is 0.05 meters in width and it should contrast the color of the floor and the ball so that the spectators, goal judges, and referees are able to see the ball and court clearly. The floor must also have a smooth surface. At the Paralympic level, a technical delegate from the International Blind Sports Federation (IBSA) will check and approve the surface of the court.

If you or someone you know is interested in taking part in goalball, we invite you to contact us today. We’re always looking for participants, volunteers, or spectators who enjoy competitive sports.