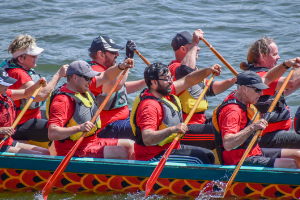 Did you know that NWABA supports two dragon boating teams in the Portland area⎯Lethally Blind and Team VIP? While both teams practice their skills on Oregon’s Willamette River, Lethally Blind competes exclusively at the Portland Rose Festival, and Team VIP practices several times per week and competes in various races throughout the year. About 75% of team members are blind or visually impaired but that didn’t stop Lethally Blind from placing 3rd in this year’s Rose Festival Division C  semi-finals race, after taking time off due to the pandemic.

Dragon Boat Racing originated in China more than 2,000 years ago as a rite to awaken the hibernating Heavenly Dragon. Today, crews of up to 20 people sit in pairs and paddle to compete in races over distances of around 250m. Each boat has a drummer beating time to keep the paddlers in unison, and a professional helmsperson in the stern to guide the boat.

As one of the fastest growing watersports in the world, dragon boating has many of the same benefits as other team sports such as social inclusion, increased physical fitness, competition and it helps to balance mental wellbeing. It’s a full-body workout which can improve cardio, endurance, stamina and coordination. “The key to successful paddling is timing,” says Lethally Blind team captain Char Cook. “It is synchronized paddling with every single paddle going into the water exactly at the same time. For sighted team paddlers they teach to watch the paddle in front of them. Those who are blind or visually impaired feel the boat’s timing.”

Char has competed at the international level as a member of Team USA in the World Dragon Boat Games and is also a teacher at the Oregon Commission for the Blind, who helps others adjust to sight loss by teaching cooking and social skills. “When I meet someone who is struggling with vision loss, my first response is to get them on a dragon boat,” she says. “Paddling can work magic for people and take them away from despair and bring hope and a drive to win both on the boat and in life.”